Children’s Feet and Legs can be Corrected!

Home Factsheets Children’s Feet and Legs can be Corrected!

Children’s Feet and Legs can be Corrected!

Does your child complain of pains in the legs and feet at night? Are they clumsy and continually ‘trip’ over? Do they feel their legs are tired after walking?

I often see parents bringing their children to the clinic citing that they suffer from growing pains and I get asked: Is this normal? I respond by simply saying: “If it were normal every child would suffer from the same pain which is not the case”.

This condition appears to affect children who are growing rapidly and often have biomechanical misalignments in their lower leg bones, due to genetically pre-disposed conditions. 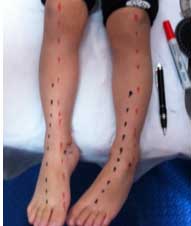 For many years it was thought that children with ‘pigeon toes,’ ‘out toeing’ or ‘flat feet’ issues merely corrected over the years. This is because it appears to improve with age. However, when a child reaches the age of six, this position will not correct any further unless it is encouraged to do so through specialised treatment.

These conditions are known as internal and external tibial torsion.

The apparent correction and the reason it seems to improve with age actually comes from compensatory hip motion.

If they are in toeing, the muscles on the outside of the hips will contract and over-work to encourage out toeing to correct the biomechanical anomaly  and resultant alignment. The abnormality in hip motion can be seen through comparing internal and external hip rotation (turning the hips in and out). The ideal range is 45 degrees each way.

The opposite compensation occurs for the child with external tibial torsion (twisting out at the shins) – muscles on the inside of the hips will contract to pull the foot straight. If there is an ‘out twist’ at the shins and an ‘in twist’ at the hips, instead of the knee working in a hinge motion, it’s working in a twist motion.

Put simply in the case of in-toeing from the knee down the bone is twisted or torsioned inwards; however from above the knee the hip muscle will be working in the opposite direction in an attempt to straighten the leg. This results in an abnormal rotational stress at the knee joint.

When children are still growing, their bones are still soft and malleable. Use of orthotic therapy (an insole for shoes) is an excellent regime as it will re-align the biomechanical structure and control the excess pronation occurring at the feet, stabilising the lower limb structure.

Using a specialised ‘gait-plate’ type orthotic for children we are able to encourage children to walk in a pattern that will torsion (twist) the bone in or out, depending on the correction needed. This problem of pigeon toeing or out toeing can be permanently corrected to prevent the need for orthotics later in life, and help to prevent any serious knee issues.